Recent reports give a number of between 100,000 and 300,000 who annually participate in the Shikoku pilgrimage. Of these, it is estimated that about 5,000 are walkers and about 500 are foreigners.

With so many people now making the pilgrimage it is attracting a lot of coverage in the media and there is a huge amount of information on the internet, so I will try to refrain from repeating basic facts here. My aim is to provide a brief history of Temple 1, suggest some interesting things to look at when you visit and present what foreigners in the distant past have said and written about their visits to the temples.

About a fifteen-minute walk from JR Bando station in Naruto is Ryōzen-ji (霊山寺) the temple where many pilgrims start their journey. On the temple grounds and close by there are stores that sell all the necessary pilgrim accoutrements, including Shikoku Japan 88 Route Guide – the only map/guidebook in English.

Regarding the history of the temple, it is believed that during the 8th century a Buddhist priest, Gyogi Bosatsu (668-749), established Ryōzen-ji under the direction of Emperor Shomu (701-756). Then when Kūkai came to Shikoku to make the pilgrimage in 815, he trained here, carved the statue of Shaka Nyorai and consecrated this place as the starting point of the pilgrimage.

During the 16th and 19th centuries, most of the buildings were destroyed by fire but were later restored. One building to take notice of is the one to your right when you enter the main gate. It is normally closed, but above you can see a sign that reads from right to left: Kishu Settaisho (紀州接待所). “Kishu” is present-day Wakayama prefecture and “settaisho” means a “place for giving settai.” (settai means tangible or intangible gifts). For more than two hundred years two groups have come here from Wakayama to distribute settai, such as fruit and other items, to pilgrims on a few days in March and April.

During World War I there was a German POW camp between Temple 1 and 2 and that there was a lot of interaction between the local people and the POWs. Between March 8 and 19, 1918 an art exhibition was held on the grounds of Ryōzen-ji and at a public hall across the street (now a gravel parking lot) during which time the Germans sold food, played music, and displayed things that they had made. The event was such a success that over 40,000 people attended.

After the war one of the Germans from the Bando camp stayed in Japan and worked in Osaka. His younger brother, Alfred Bohner, could not find work in Germany so, thanks to his older brother, secured a teaching job in Matsuyama from 1922. Five years later, Alfred embarked on the Shikoku pilgrimage and took this photo of Ryōzen-ji. Alfred later published a book “Wallfahrt zu Zweien” (Two on a Pilgrimage), which has been republished in English and German, that describes his research on the pilgrimage and journey around Shikoku. He is perhaps the first Westerner to produce a book on the Shikoku pilgrimage. 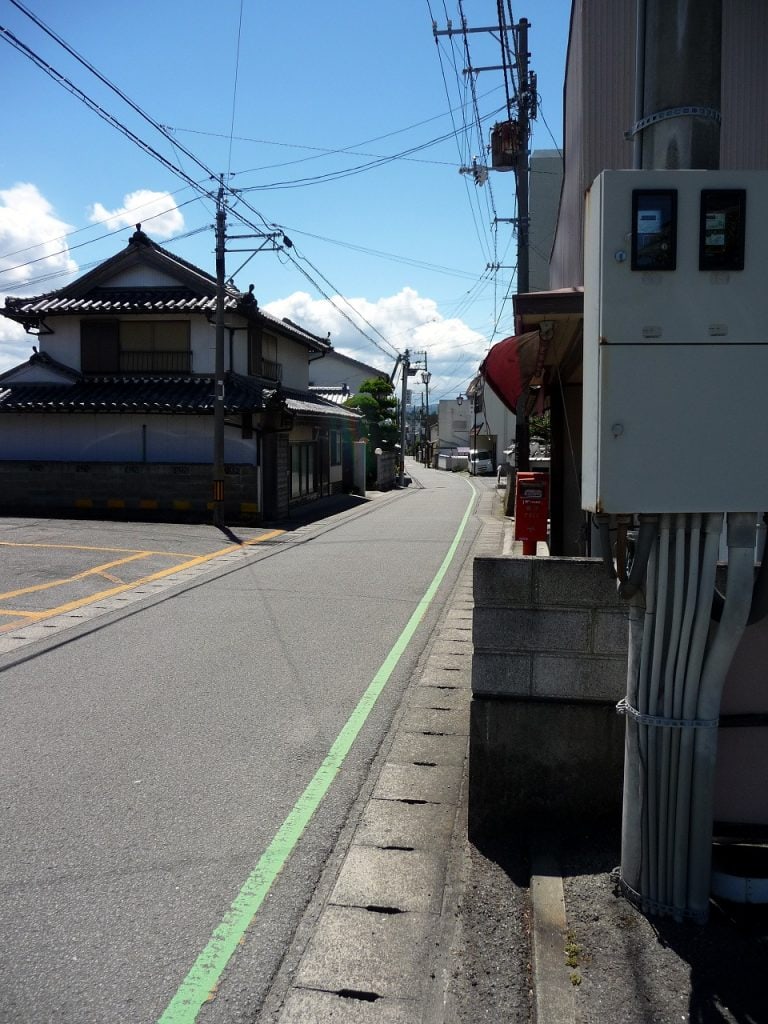 Comparing the main gate of 1927 with today, you can see that nothing has changed, but now there is a very busy road running left to right in front of the gate. On nearby poles, there are path markers that point the way to Temple 2, but I suggest ignoring them and walk the original route, which runs straight down from the gate. Follow the green line painted on the road, which actually goes all the way to Bando station, but turn right at the two large stone pillars that state “Temple 1, Ryōzen-ji” (霊山寺) and proceed through the tranquil streets to Temple 2, Gokuraku-ji.

This article was first published in the April 2014 issue of Awa Life.