Do you like to go spelunking or contorting your body in all sorts of directions in order to pass through small rock crevices? Do you like tales of mystic rituals, sorcery and battles with dragons? If so, then I highly recommend going to Jigen-ji, which is number three of twenty bekkaku (other) temples along the eighty-eight temple Shikoku pilgrimage, and going through the cave there called Anazenjo (place of ascetic training). This temple, located on top of a mountain in Kamikatsu town about 35 kilometres from central Tokushima, can be best reached by car although it is possible to get somewhat close by bus.

It is said that in 793, when Kūkai came to this place to pray that humankind be spared suffering from misfortune and illness, he discovered the cave and for three weeks sat in front of the cave reciting sutras and conducting a fire ritual. From the depths of the cave, an evil dragon emerged and tried to torment Kūkai as it had done with the local people, but Kūkai drew a Sanskrit letter on a small rock, threw into the dragon’s mouth, and the dragon was entrapped into the walls of the cave. In fact, at one point along the cave tour, the guide will show you where the dragon’s body, head, horns and tails are believed to be. 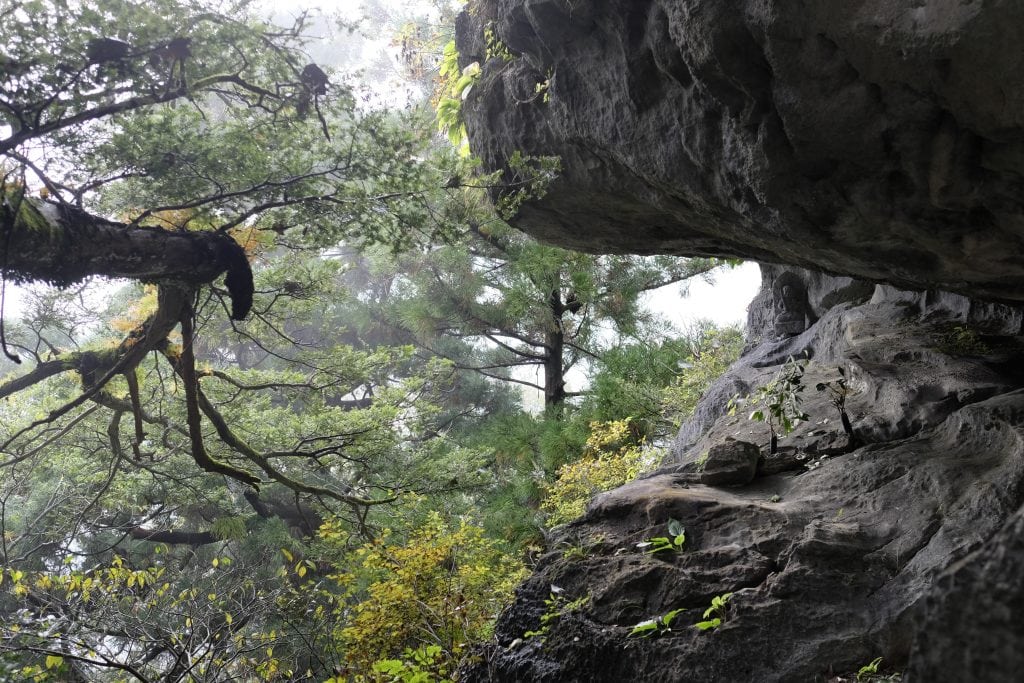 Let me explain some of the details of the cave tour, which does not run on a regular schedule.

First, take the cave test. Find two round pillars approximately 25 centimetres apart beside one of the temple buildings and squeeze your body between them. If you can get through, then you should be able to get in and out of the cave. If you fail this, you will not be allowed to enter the cave.

Second, if you pass this test, go to the temple office and pay the tour fee of 3,000 yen, per person. A staff member will lend you a 3/4 length white robe that has a cloth belt, and a candle. Make sure to return the robe after the tour. Since the cave is considered to be a sacred site all participants must wear the robe and in a practical sense it keeps your clothes from getting wet and dirty. The candle is the only light you will be allowed to use in the cave and you will quickly find out how difficult it will be to hold on to it and try to squeeze through the tight spots. You can keep the candle afterwards. Be grateful that you can wear your regular shoes in the cave because in the past participants had to put on straw sandals.

Third, place any valuables, bags, hats and other bulky materials in a free locker located just inside the temple building. There will be no room to carry such items through the cave. Even carrying a camera might be difficult. If necessary, go to the bathroom and perhaps eat and/or drink something because it will be a couple of hours before you get back to your stuff. The cave is about 100 meters long and if there are few people on the tour, it will only take about an hour to go in and come back out, but if there is a large group, it can take two to three hours!!!

Fourth, follow the trail for about fifteen minutes up the mountain until you reach the main hall (hondo) and two other buildings. Here you will meet your experienced guide, some of whom have been leading groups of people in and out of this cave for decades. Some give tours up to five or six times a day! 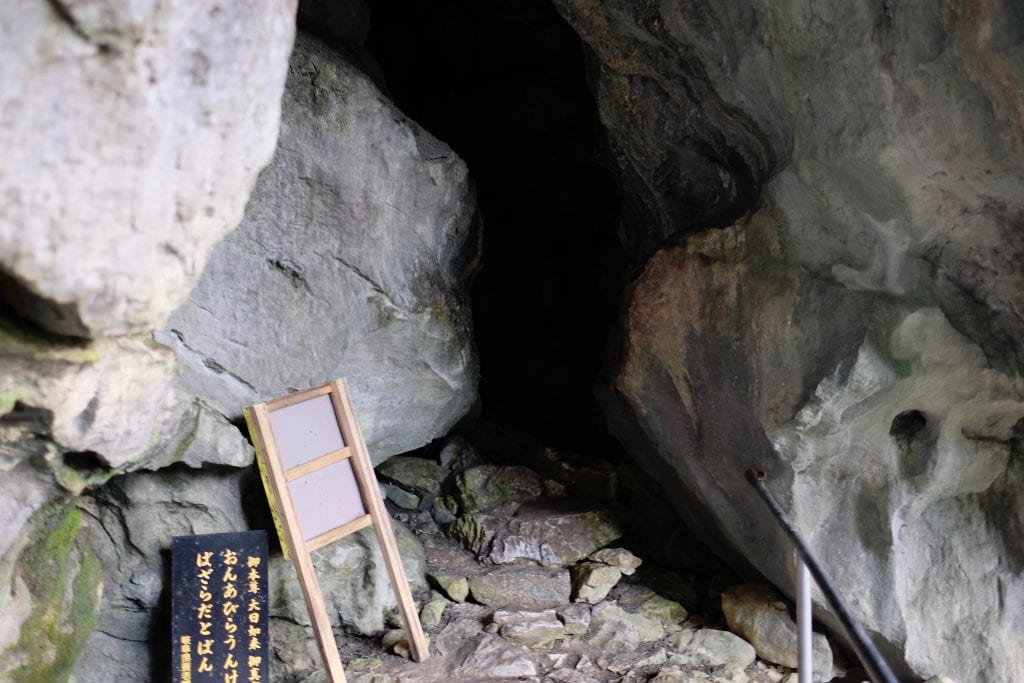 Fifth, you will first climb some steep stairs and see the spot where Kūkai sat for ascetic training, then you will go to the entrance of the cave, light your candle, and proceed in. The guide will give you very precise directions, which must be followed exactly or else you will not be able to get very far into the cave. However, you might find that the guide speaks super-fast as I certainly did, and I could not follow what she was saying; but do not panic and take your time. You should be able to make it through the super-tough spots. Note – No directions or explanation will be given in English. 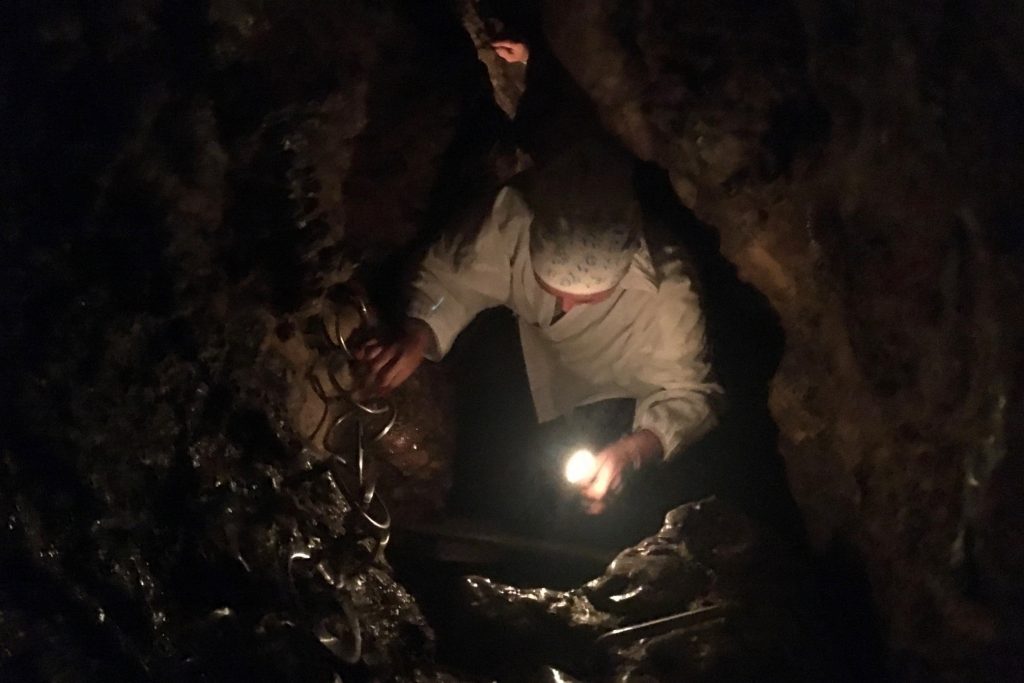 At certain places, the guide will stop the group and give commentary about the special meaning of certain rock formations. At the “end” of the cave – a small room-like area – the guide will lead the group in sutra reciting including the Heart Sutra. As well, the guide will ask, “Is there anyone who wants to make a wish? Candles are 100 yen. Please pay when you get back to the temple office.” If you say yes, then the guide will ask your name and your wish, will light a candle, place it on the candle rack, and repeat what you said to the statue of Kūkai/Kōbō-Daishi with a petition of “Yoroshiku onegai shimasu.” (May this wish come true). Then you will begin the trip back, which I think you will find easier than coming in, but I am sure you will be very relieved to see the light at the entrance.

Finally, walk back down the trail to the temple, return your robe to the office, pay for any candles that you bought to make a wish, and congratulate yourself or others you are with for making it through the cave. Your body may hurt in places for a few days, but it is said that if you make it through the cave something good will happen to you. Your cave tour will not have been made in vain!

Photographs of the temple and cave

This article was first published in the June 2014 issue of Awa Life.